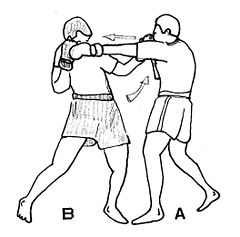 Combatives – Before, During & After the Strike

Most often you were damned if you do, damned if you don’t.  In chess they call that being on the receiving end of a “fork move”.  The opponent has you coming or going, it makes no difference.  While I don’t think I’ve arrived at his skill level, I strive on a tactical level to make sure every opponent move or lack thereof is being exploited by me.

(listed below is a vid posted by a buddy not too long ago.  Vunak demonstrates acting before, during and after the strike.  Does your techniques have to look like this?  No, but one could do worse, that’s for sure.)

Before the Strike:  Did you know that an opponent is very vulnerable to blows right before he’s about to strike?  He’s focusing his energy into setting his body, forsaking other possible avenues of attack and for brief moment he’s still.  When he’s still, even for a fraction of a second, he’s ready to be hit.  The trick is reading the telegraph that says “hey, I’m going to hit you now”.  Striking as the threat is moving in, or winding up is called “intercepting”.  There are ways you can draw this vulnerability out.  That’s for another post or chapter in a book.  One should have time devoted to “intercepting” a threat before he has time to strike.

During the Strike:  Just as “before” the strike, during a strike – the threat is vulnerable, because he’s committed to an action.  While the kick, jab, or cross is in flight, if you read the telegraph, you’ve already started to step “off line” (out of the way of the strike).  Someone who’s polished their footwork and timing already has another strike inbound as the threat misses, you’re landing your strike.  The perfect example is when you slip a jab moving forward while delivering a hook to the body of a threat.

After the Strike:  After the threat’s strike, if you’re still on your feet and conscious, it’s a race, if you will . . .  It’s a race to reset for him, and a race to exploit his need for reset.  He’s trying to move to mitigate this vulnerability, while you, if you did it correctly have “destroyed” his strike and pre-positioned yourself to end the threat before he can recover.

Granted this is pretty crude explanation of vulnerabilities present in a fight, but the point remains – every action by the threat is an opportunity to land him on his butt.  The person that gears their combatives work, combinations, timing, footwork toward handling the strike before, during and after it’s thrown, will seek advantage (and probably find it) at any given time in a fight.

Finding ways to incorporate these concepts in one’s combatives regimen is pretty much getting the best bang for your buck.